2018  was the 50th year of the Association’s existence, and two main events were planned to mark the occasion: a celebratory lunch on the Firth of Forth in Scotland and an Anniversary Rally at Emsworth.

The 2018 AGM  was held in the waterside Royal Oak at Langstone.  The weather intruded with a tidal surge which nearly flooded us out. 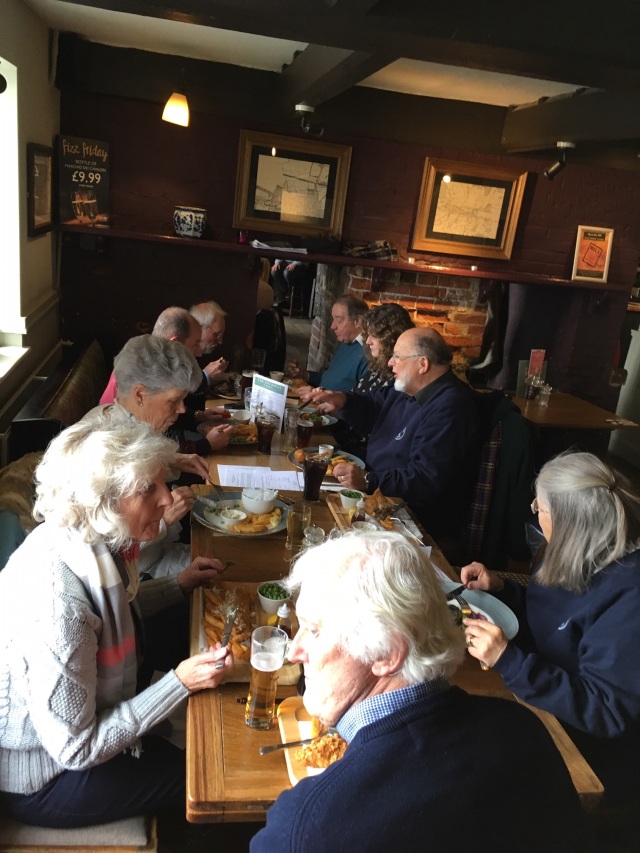 It was such a hardship to be cut off for a couple of hours in such good company and a well stocked bar until the water retreated!

Our first Celebration event was a visit to Eli on the N coast of the Firth of Forth where Chris Tabor, Treasurer Jean Reed, Hon Sec Howard Jackson, former Commodore Marion Quantrell and I met a number of Scottish TOA members for a very convivial lunch. Thanks to Paul Copp who acted as our local contact. TOA 50th anniversary lunch at Eli on the Firth of Forth

The minor detail of a certain Royal Couple getting married at the same time did not at all distract us from the serious business of discussing our boats over an excellent meal! However there was a TV in the Bar so the Ladies were able to see Meghan’s dress and watch the crucial part of the ceremony before we sat down to the important business of the day. Thanks everyone who attended for a great day.

In June our main South Coast celebration was planned as a rally. At first we thought we would repeat the Rally organised in 2010 to celebrate the first launching of the Trident. This was at the former Marcon yard on the Itchen.
However on investigation it was found there was little space there now, the site had deteriorated, and the Pub which had served us so well before had changed hands (several times) and could only provide snacks, not the proper dinner we wanted.

So the promise of a substantial reduction in berthing fees at Emsworth marina in Chichester harbour decided us to go there instead. The marina Webcam overlooks the visitor pontoon and over 40 people used the FaceBook link we set up to log in and see what we were up to. Seven boats attended: Swallow, Red Kite, Spin, Trifler, Lottie, Juno and Kestrel . 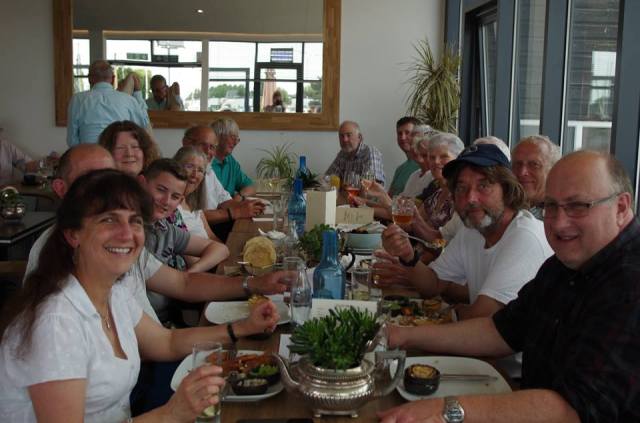 Lunch at the Emsworth Rally

Twenty one of us sat down to an excellent lunch at the Marina’s The Deck Restaurant, including several who had come by road, and a thoroughly enjoyable time was had by us all.

Pete Munday, our South Coast Rep organised this for us, so thank you Pete for your hard work in making it such a success. Pete was rewarded on the Saturday morning by heading a small fleet of Tridents up the Emsworth Channel to the Marina (below). I missed this having come in the night before, but it must have been a fine sight! 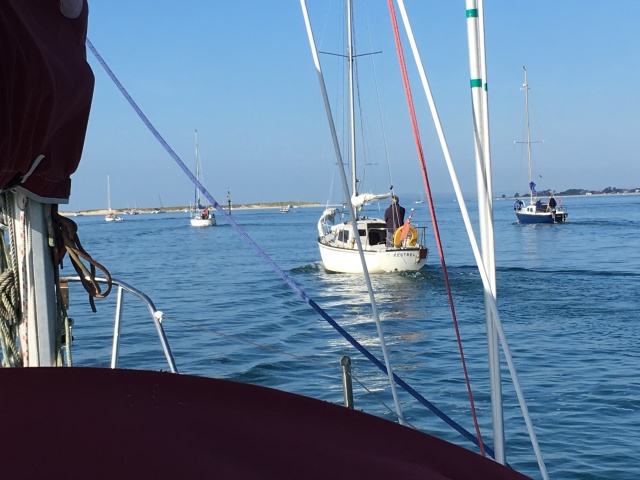 Red Kite leads the Trident flotilla of to the Emsworth rally

Pete also organised a second rally at Newtown River on the Isle of Wight in August. Unfortunately the weather had broken, and several boats who had hoped to attend called off. I can’t blame them: my own passage in Spin was akin to sitting in a car wash for six hours, with f5-6 on the nose all the way. The ‘fun’ element palls somewhat after several hours of being bashed about like that!

Red Kite, Trifler and Spin at the Newtown River Rally

However the weather relented on the day, and those of us who made it again had a thoroughly good time, followed by a meal at the local Pub in the evening. Pete turned up with an amazing device made from a galvanised bucket over which he cooked an excellent lunchtime BBQ for us!