If you are interested in buying a Trident, in addition to the things you would check on any used boat, there are a few facts it might be helpful to know about this class in particular.

Keel types: there are three basic options. The numbers of each version produced give an indication of the popularity of each keel form.

The fin keel (3’8″ draught)  is the stiffest version (heels over less in any given wind) as much of the ballast is carried in the bulb low down on the fin keel. The fin keeler has less wetted area so is likely to sail a bit faster and may make to windward better than the triple keel version.

On the other hand, the fin requires a deepwater mooring  (or a soft fore and aft  berth where it can dig a hole to hold it upright when it dries) and this can add to the expense of owning a fin keeler and may make them less easy to sell than the bilge keeler.  Fin keelers can be fitted with legs to enable them to dry out when required in sheltered conditions.  About a third of all Tridents built were fin keelers.

The centreboard version has the shallowest draught capability (2’1″) and the deepest (5’9″ with the plate down).  No systematic comparison between the performance of the fin version and the centreboarder ever seems to have been carried out but it seems likely that the centreboarder has better windward capabilities than the triple keeler but perhaps not quite the same stiffness provided by the submerged ballast bulb of the fin.

The raised plate enables the centreboarder to come and go sooner in shallower moorings.

Short legs can be used to enable it to dry out upright in sheltered situations.  The centreboard case occupies the centre of the main saloon though devotees of the drop keel version maintain this provides a useful base for a cabin table or even a seat when cooking or doing chart work.   One or two had short bilge keels fitted to enable them remain upright on drying moorings.

About one Trident in six was supplied with a drop keel. 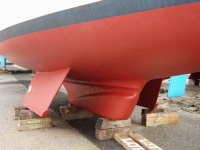 Triple keel: more than half of all Tridents were supplied in the triple keel form (sometimes referred to as the “bilge keeler”).  The Trident’s galvanised steel bilge plates are attached in a unique fashion making the triple keeler extraordinarily robust – unlike some bilge keels  which have a tendency to splay out or put undue stress on the attachment points to the GRP.  The greater popularity of the triple keeler is almost certainly due to its ability to use cheaper drying moorings.  Its greater wetted area and the relative shallowness (2’6″) of the triple keeler’s draught mean it performs less well than the other keel forms but it remains a seaworthy, capable cruiser.  Many of the more epic voyages completed in Tridents have been in the triple keeled version.

Age and build quality: All Trident hull mouldings were completed to Lloyds standard and issued with a certificate to this effect.  The certificate gives the best indication of the age of the mouldings though many home-completed boats may not have been launched until years later. (See article here on dating a Trident)

Because they were one of the earliest GRP designs, completed before the great strength of this material was fully accepted (by builders or their customers), they were very strongly built compared to today’s lighter GRP yachts. All Tridents will by now be more than 40 years old and vary considerably in cosmetic condition. Generally they are regarded as having a good record with regard to osmotic blistering of the laminate and gel coat. Though  gel coats may by now have worn or faded and many Tridents will have been overpainted.

The majority of Tridents (about two-thirds) were supplied to their original owners as self-build kits or  mouldings .  The full kits included the same components used to complete factory-finished versions so many will be much the same as the Marcon completed boats.  But some self-builders bought only mouldings or incorporated their own ideas or materials and as boats have aged, many have been improved or modified internally.  Examples can be seen on the Layout below page.  As the website Lottie’s Log shows, complete replacement of the internal wooden furnishing  is not difficult, using a couple of sheets of plywood and the original parts as templates.

Wooden coachroofs: the first ten or so Tridents were built with wooden decks and coachroofs.  A few hull mouldings were also later supplied to home builders who completed their Tridents in wood, combining the cosiness of a traditional coachroof with a low maintenance hull.  But the vast majority of Tridents have a GRP hull and deck moulding.  Originally the GRP hull and deckhead was painted internally – as were most early GRP boats. Many have sinced been lined with a variety of materials.

Known faults: Any boat can be damaged or suffer corrosion or decay. But the Trident’s designer, Alan Hill, who is also a professional surveyor who has inpected many of his old designs over the years, regards the Trident as having no really inherent defects.  No instances of corrosion of the stainless steel keel bolts have ever reported to the owners association – though several Trident owners have complained about fruitless and expensive inspections of spotless keel bolts insisted upon by cautious surveyors.

TOA members’ experiences suggest that, in addition to the checks you would make on any used boat and its engine and gear,  there are a few points worth watching out for in a Trident. None of them are fatal:

Bulkhead delamination: Like many boats,  any water penetrating the hull/deck joint can find its way into the endgrain of the plywood bulkheads.  Over many years this can cause rot or delamination. Check for signs of damp penetration in the bulkheads high up under the side decks.

Rudder rust: After many years, the galvanised steel rudder stock is prone to rust at the waterline where it emerges from the rudder bearing trunking glassed into the hull. Zinc anodes on the rudder blade may help deter this. Heavy grounding can also cause the stock to bend here – especially if weakened by corrosion.  Any competent blacksmith or steel fabricator can repair or make a new Trident rudder.

Rudder bearings: the original tuphnol bearings in the rudder stock wear after many years though even a considerable amount of play is of little account and certainly less hazardous than the seizure of the rudder that can occur when sloppy bearings are wrongly replaced with water-absorbent nylon bearings.

Centreboard pivot bolts (and the centreboarder’ lifting rudder pivot) can wear after many years use.  Check when these were last inspected/replaced.

Bilge plate shoes: the bottom of the bilge plates of the triple keeler were originally fitted with horizontal rails or feet to control wear and prevent the plates sinking in soft ground. These wear over time and may be completely absent.  Any competent welder can replace them with a suitable mild steel strip. Originally they were galvanised but constant grounding means any paint or galvanising treatment is soon be worn off anyway.

Did you find this article helpful?  Can you suggest improvements? Please let us know using the form below: